Are there any SD Card diagnostic utility programs out there for Ubuntu? I would like to run tests on my SD card to check capacity, write speed etc. I have one for windows but I am looking for a Linux flavor and hope to find some source code. 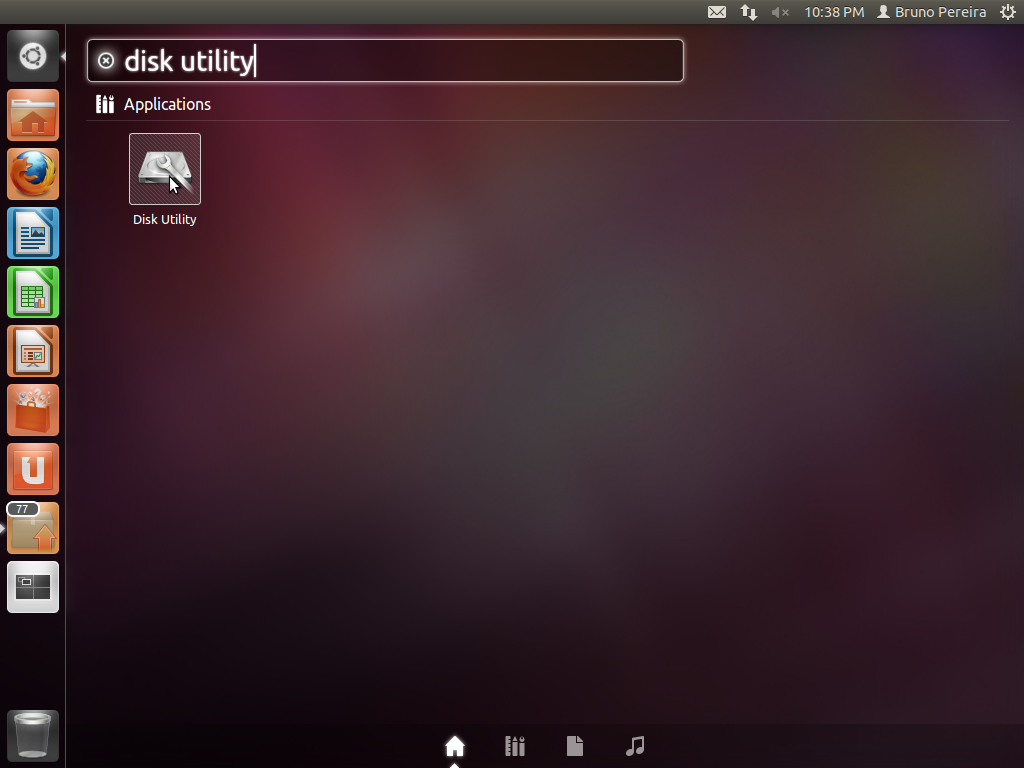 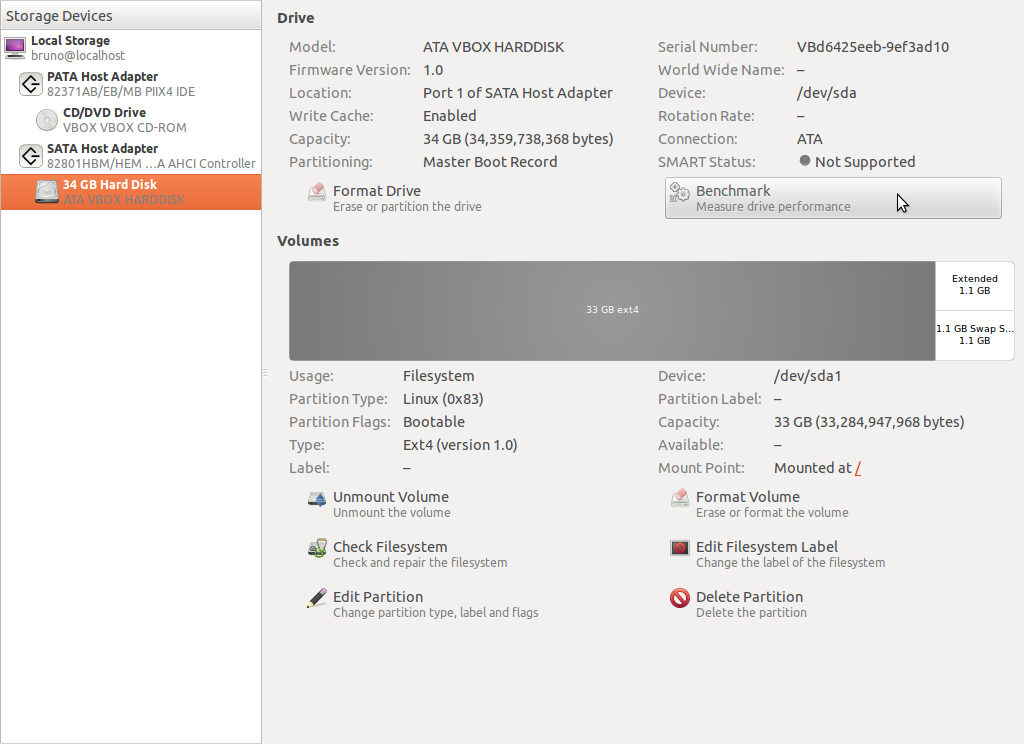 To start benchmark, select Read only or Read/Write benchmark 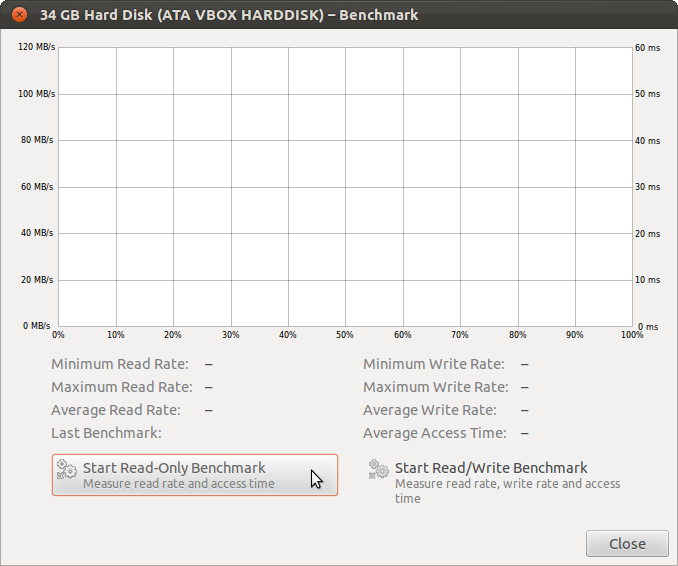 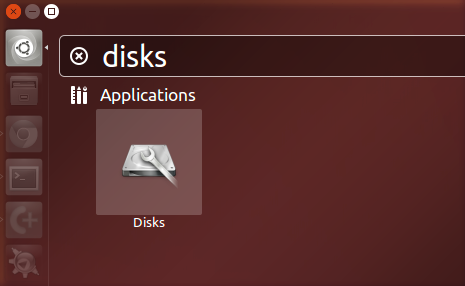 From the command line

Select the disk you wish to test. 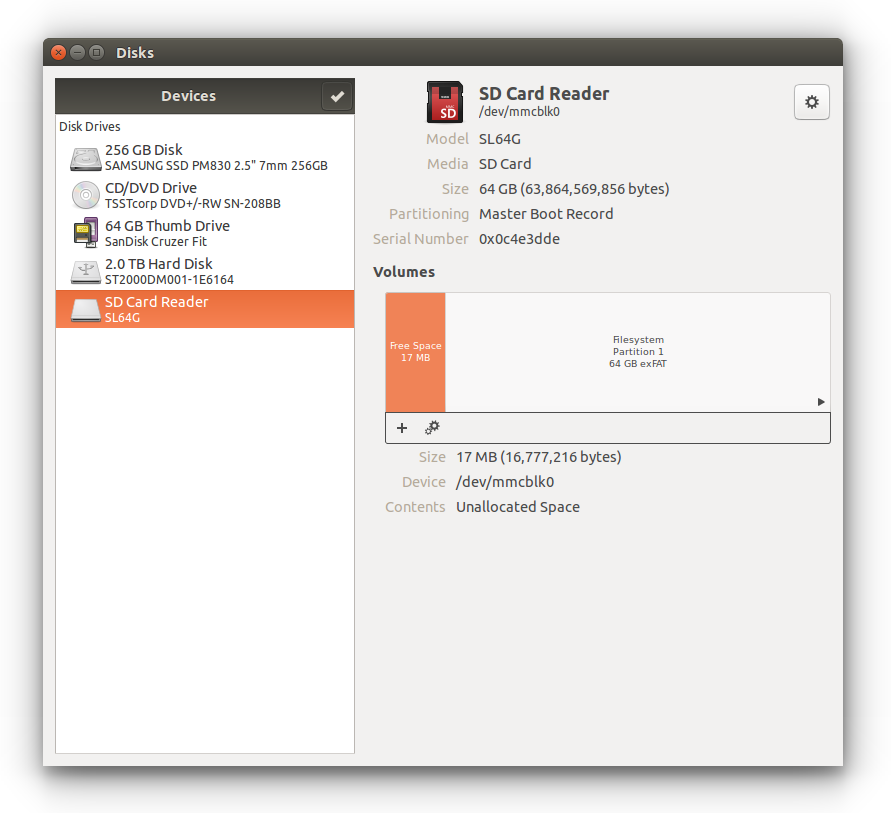 Find the menu in the top right and select Benchmark… 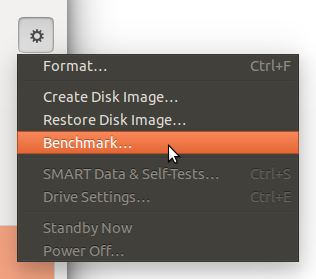 A window will appear. Click Start Benchmark… to see: 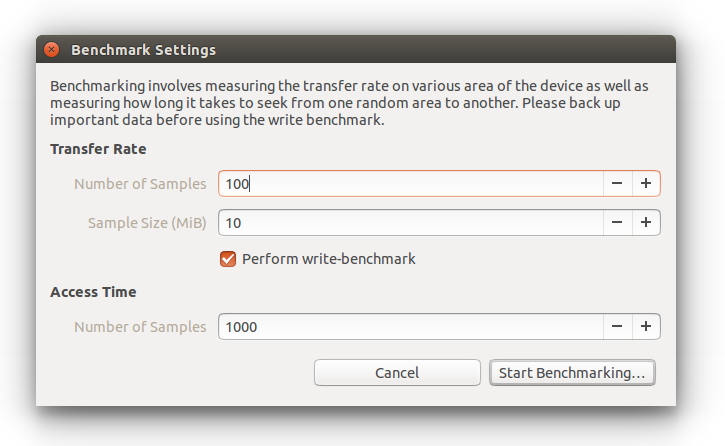 I left the defaults and clicked Start Benchmarking…. It will run for a while, building the chart over time. 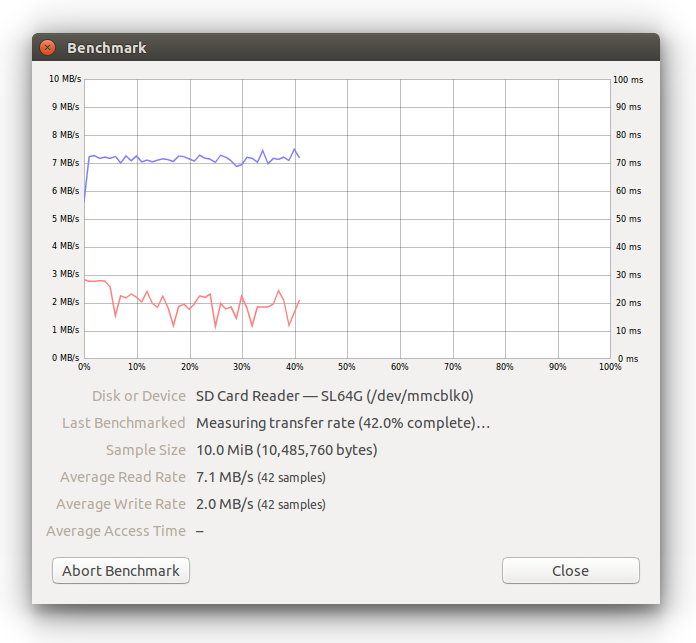 You can see that my new SD card’s read rate is around 7 MB/s, while the write rate is only slightly over 2 MB/s.

The model shown here is a SanDisk Ultra SDXC with an advertised speed of up to 30 MB/s. As you can see, the transfer rate is not as advertised.

dd will fill up all the space. Remove the testfile afterwards.

There is also f3 (Repository, doc), that specifically aims at detecting fraudulent cards.

It was suggested here first.

Why was Diffuse left out of Universe repository of Ubuntu 20.40? What to use instead (if you don’t want to use plain diff but a graphical software)?

I have packaged it in my PPA:

In the above PPA packages were compiled from their original source code from previous Ubuntu versions.

The package was dropped from Debian back in 2019, thence from Ubuntu also.

Using the top command in the terminal lists processes, sorted by their CPU usage (and you can change it to sort by another parameter)

Is there an equivalent for the GPU?

This fellow is asking about RAM used by GPU

You can use gpustat, which is a simple command-line script (wrapper for nvidia-smi) for querying and monitoring GPU status:

Thats what you get:

It also monitors the CPU, disk IO, disk space, network, and a few other things:

I use the following command:

and it gives me updates every 2 seconds. 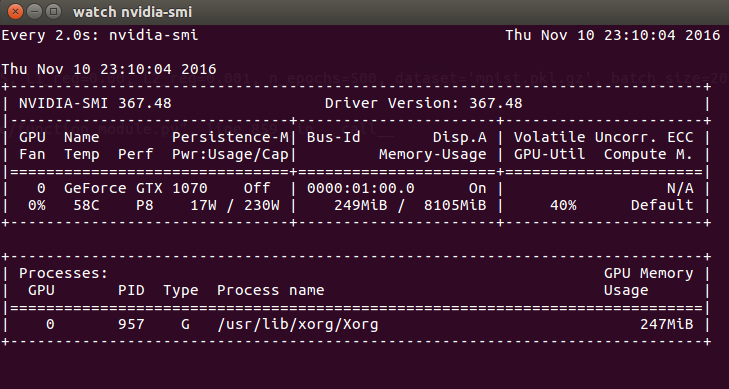 I like to use conky as a real-time monitor for both CPU and GPU. Installation is straightforward:

In this instance I’ve booted using the integrated GPU rather than the nVidia GTX 970M:

In this instance I’ve booted using the nVidia GTX 970M rather than the integrated GPU:

The conky code was recently modified to auto-sense the GPU. Now it doesn’t have to be hand modified when rebooting to a different GPU:

Different versions of the full code listing can be found in these answers:

I just found this command:

Here is a demo:

Is there an app to mute the computer say 10PM to 7:30AM? (On Android devices I use: phone silencer app )

Following the link in the comments of @Rinzwind: How do you mute from the command line?

Use crontab to mute and unmute the computer at night as follows:

Open a terminal by pressing Ctrl+Alt+T and enter one of the the following lines to edit the /etc/cron.d file:

For a regular user, use the following command:

For system-wide solution, use the following command:

At the end of the resulting file add the following two lines:

Press Ctrl+X and then Y to save and exit crontab.

See the CronHowto in Ubuntu Help for more details.

Note: This will not work if the machine is off at the predefined time. For example, if power goes off at 9PM and comes back at 11PM, audio will not be muted when the power comes back.

Is there a way to reboot and get back to the same state it was before reboot with all windows and apps back similar to reboot in the background because the user would not notice if reboot was quick when the user was away for a minute?

Windows 10 can do this I think but it is because Windows 10 runs everything in hyper-v and saves a snapshot of the OS state if I understand correctly. So Microsoft can check the computer that the user is probably sleeping at 4 AM, install some updates which require rebooting, reboot the system and the user won’t even notice that it was rebooted because all the programs are just like when they were last time.

Maybe there is some requirement for certain processes which cannot be run.

Is there a way to plot this data in the terminal, too?

I’ve found termgraph, which allows to plot in the terminal, but it doesn’t work with data from sc.

Thanks to K7AAYs hint about the fact that sc-im does have plotting integrated, I figured out how to do this:

Press ‘v’ to enter visual mode and highlight the data, then enter “:plot bar” to plot the data as a bar graph. Using “:help” and searching for plot reveals this information. Other than ‘bar’, there’s also ‘line’, ‘scatter’ and ‘pie’.

I need to see the channels used by all Wi-Fi networks in range in order to improve my Wi-Fi connection by selecting the channel to be used by my modem (a procedure related to the ‘freebox’ modem).

In Windows there is Vistumbler (that I know of).

What would be the equivalent in Ubuntu?

You can use this Linssid: 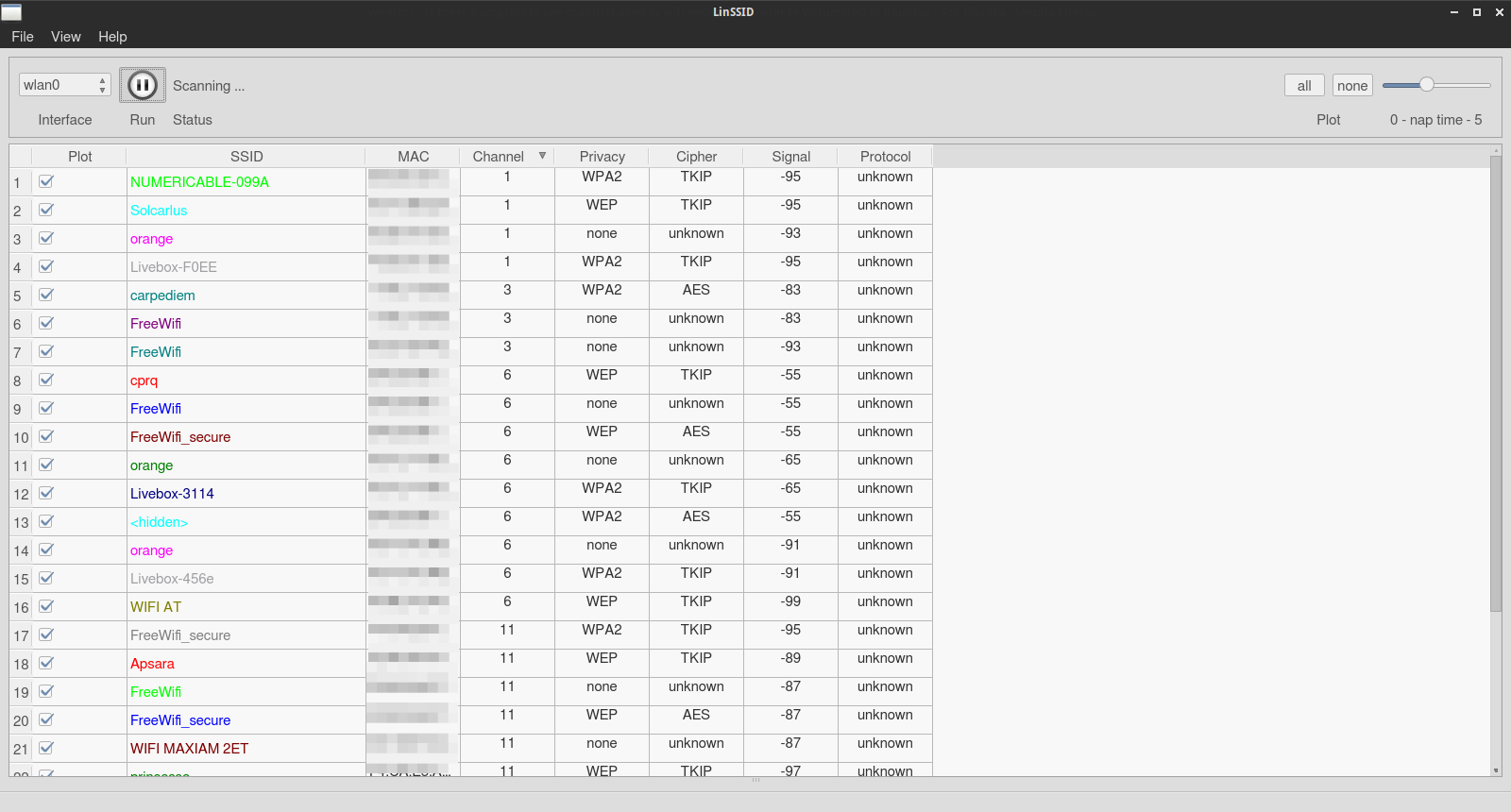 It will show you ssid, mac, power signal, and graphic.

In addition to Rozza’s answer you can group the results and see how much each channel is used:

If you get something like wlan0 Interface doesn't support scanning, you have to replace wlan0 with the interface specified after running ifconfig (e.g. wlp2s0 etc).

I’m guessing you’re looking to set to a channel that is not being used locally – so you want to see a summary of what is being used. Try the following from the command line:

If Kismet fails to work with your wireless card, I’ve used wicd in the past;

A network connection manager that aims to simplify wired and wireless networking in Linux.

It is in Ubuntu repositories – can be easily installed from Synaptic. 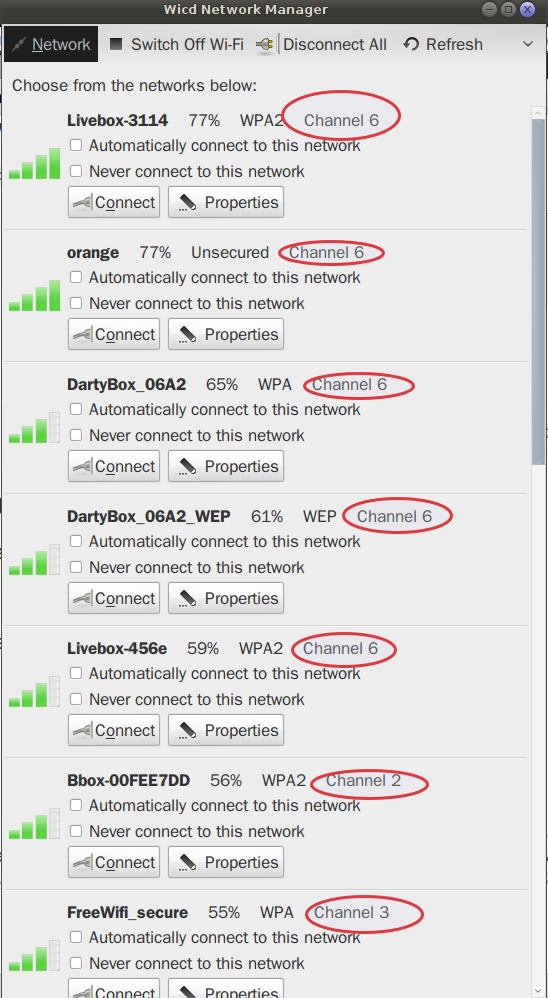 Yes , There is Alternative to Vistumbler

Another Way To Monitoring Wireless but via Terminal :

It’s in the Ubuntu repositories (as wifi-radar): 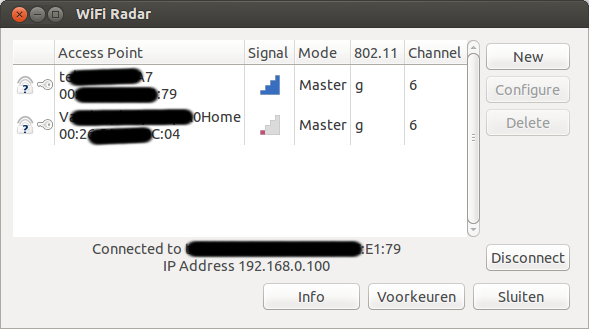 You can also use nm-tool on the command line (this is the default network manager for Ubuntu, normally you use its GUI). Somewhere in the output of nm-tool, it contains the following section of found access points:

To convert the frequencies to channel numbers, use the command iwlist frequency:

wavemon is an ncurses-based monitoring application for wireless network devices 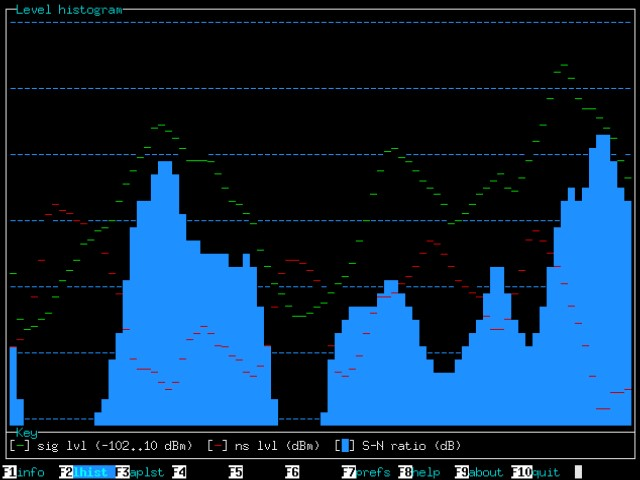 wavemon is a wireless device monitoring application that allows you to watch signal and noise levels, packet statistics, device configuration and network parameters of your wireless network hardware. It should work (though with varying features) with all devices supported by the Linux kernel.

If you wouldn’t mind using the command line you can use wpa_supplicant to help you see the channels in use in the neigbourhood.

when you are presented with the interactive shell, start a scan

finally to get the channels being used do

when done you can exit with quit 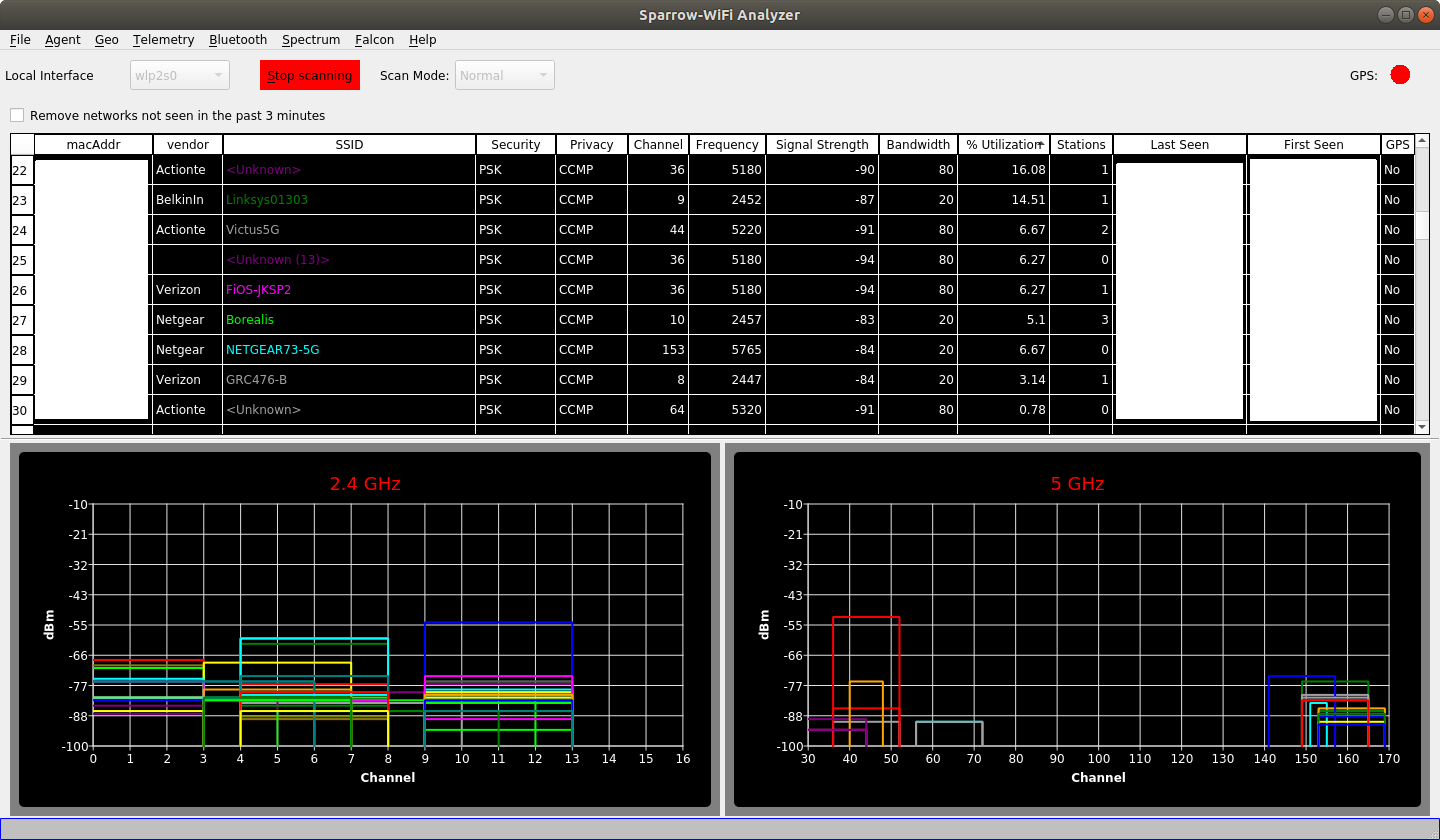 Are there any good Linux alternatives to Garageband?

The most important features would be:

Ideally it would be lovely to find all these features in one package but I’m definitely not against using multiple programs.

Audacity (installable in the Software Center) is probably the closest to what you want. It provides most of the functionality you’ve enumerated, with the exception of MIDI editing.

For MIDI editing I’d suggest Aria Maestosa, though it’s not currently packaged for Ubuntu so you’ll probably have to download and build the source.

I know it’s a bit too late, but for future users, Ardour seems to be the best option, there’s a free and paid version and it is available in Ubuntu’s repo, you can install it via 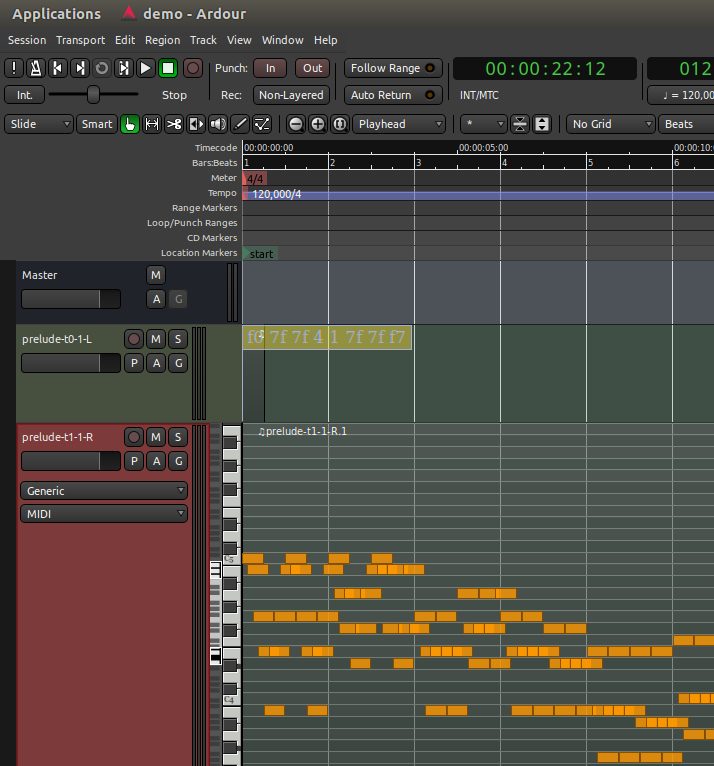 Makes me sad to say, but I’ve really tried a lot of different options to replace Garageband on Linux. I just have not found any good options thus far.

Why is Garageband good for me, a musician who plays instruments, and likes to create his own melodies, rhythm, percussion, strings, and other tracks?

It’s dead simple to get started. I plug in my 88 Key USB Midi keyboard (detected automagically), create a new project, add a track, pick a sound (instrument) from a pre-installed list included with Garageband, and start playing / recording. Need another Track, add a track, pick a sound, start playing / recording. Need to switch back, just click the track and done.

Thus far on Linux my experience has not been so smooth. I tried LMMS (which is okay, but getting sounds is not simple or straight-forward. Recording, still haven’t figured out how to record a track. Want to hear the sound on track 2, oh wait, you have to go tell the midi connection that you no longer want track 1, and now want track 2. Rosegarden…nice, but first I had to spend weeks trying to understand JackCTL, then find a synth to connect it to, then figure out why my midi keyboard wasn’t detected, then once I could play a sound, forget about switching tracks…OMG!

And thus far, pretty much everything I’ve tried has had some level of similar complication. Ardour, QTractor, Reaper, Waveform Free from Tracktion, and on, and on.

I love open source software, but it has got to be easier for the average bear. I just want to connect up, sit down, and start playing / recording. I just want to switch tracks, and the system knows…ohhhh you want to record strings now…not brass…ok. If anyone has something that will work with anywhere near the ease of Garageband, but on Linux, please let me know about it.

I am using Dell inspiron 15 and Ubuntu 13.04. I have hot keys on my keyboard to adjust display brightness and they work fine.But the problem is, as soon as I switch on the laptop the brightness is set to 100% . I have to reduce the brightness manually. Also the brightness decreases when the battery is low, when I charge my laptop. I am looking for the following:

Ctrl+alt+t to open terminal and type

this will help you to execute commands at start-up

I hope it helps!

Create a new startup application that looks like this: 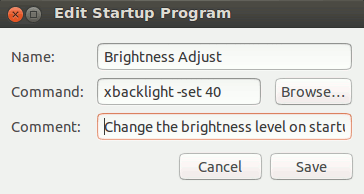 I found this on maketecheasier.com

One day I read an article about reading barcode using my webcam in Ubuntu 12.04 by a some software which I don’t remember now.

What software could help me by reading a barcode using a webcam?

ZBar is a library for scanning and decoding bar codes from various sources
such as video streams, image files or raw intensity sensors.

referred from this link

You can also use qrdecoder

Download and unpack qrDecode source tarball to any directory.

Where x.x.x is the version of qrdecoder

Change into the qrDecoder directory.

You may get an error Gtk-WARNING **: Unable to locate theme engine in module_path: “pixmap”

To get rid of this error, install gtk2-engines-pixbuf

Reading barcodes with a USB webcam on Ubuntu?

First, installed Zbar and a little program called “crikey”.
The easy way. Open a terminal and type in:

The script does this, for the more paranoid:

Now hook up your USB webcam.

Is your USB webcam supported by V4L1 (Video4Linux1)?
Then, open again a terminal and type in:

Now open Google or a Gedit instance, clic inside the search box, and put a barcode in front of your USB webcam. Focus in the barcode, as necessary. You will get the barcode number where you have clicked on before…

Is your USB webcam suported by V4L2 (Video4Linux2)?
Then, open a terminal and type in:

If the above commands don’t work, try “video1”, instead of “video0”