I’ve search online and been reading documentation for Apache, Passenger, Rack, etc, but have yet to find a solution to my problem.

I have several Rack (ruby)-based apps, located in

app1 is a Sintra app, app2 is Padrino and app3 is Rails.

What is the correct way to configure Apache’s virtual host file to achieve this?

I have 3 files in /etc/apache2/sites-available/ with this type of configuration (with changed IPs):

You’ll need to explicitly tell Apache to listen on those ports with the Listen directive; have a look at Binding to Addresses and Ports.

On third page not getting next page token google place api?

I am using Google place text search API in my Ruby on rails application, everything is working fine but after third page I am not getting any next page token so for every text search I am getting only 60 result. Is I am missing something please suggest any help would be appreciable. This happen for every text.

And usually I am searching on google it show 100’s of result for same place text. How can I get result more than 60.

This is intended behavior for Google’s Places API, as you can only get up to 60 places, split across 3 pages (3 queries). This is why there is no next_page_token on the third page.

By default, each Nearby Search or Text Search returns up to 20
establishment results per query; however, each search can return as
many as 60 results, split across three pages. If your search will
return more than 20, then the search response will include an
additional value — next_page_token.

I’ve this app on rails, where one of the form has a date_select field for a model and I’m trying to set a minimum date of today in that date_select field such that a user won’t be able to select a date before today.

If I’ve this form under the path appviewsorder_form.html.erb
and there are many other views in my app for example- appviewsservicesindex.html.erb, appviewspageshome.html.erb all of these have many html.erb files. So my question is exactly where should I put a Javascript code if i’m using Javascript in any of these files under different views? Should I create different JS files for each html.erb file or just put all JS code in application.js file?

I know I’m asking for a lot but I’m learning this new framework and facing difficulties, Can anyone please help?

For the first question, there is this another question, I think is the same answer for yours, min value in select.

For second question, you should use the app/assets/javascripts folder, you should follow the namespace, for example:

We have an issue since we upgraded our project’s dependency from rails 4.2 to rails 5.2

We use both Sprockets assets and Webpacker. When booting the server for the first time, and loading the first page (any page), it hangs right before serving the content of the page.

It usually hangs on a line like this, with no other output:

The ruby process seems idle, not using the CPU.

I realized that by running rails assets:precompile before running the server, then it doesn’t hang anymore, even if I delete the precompiled assets in the public/assets and public/packs directory.

I can reproduce it by:

We can reproduce this on at least 3 development machines and also on CI server.

The main difference between the rails 4.2 branch and 5.2 in terms of assets is the upgrade from sprockets 3.7 to 4.0, alongside all the other dependency changes.

I am stuck debugging this and would appreciate some help in how I can further debug this issue, getting more output to the log, etc.

UPDATE: I disabled webpacker in the gemfile and it still freezes

UPDATE #2: Found a related issue on Sprockets: https://github.com/rails/sprockets/issues/640 . I believe it is the same issue as I have.

The issue seems to get fixed after adding:

According to https://github.com/rails/sprockets/issues/640, there is a bug in Sprockets where a deadlock can happen, and this is a workaround fix.

My application is crashing again and again. I am using the hosting services of digital ocean the status of the server are also displayed in the image
(It start working when I restart the server but that is not the solution. After sometime it again crashes.)
Apache log.error shows:

Some information about my server is

Please post the following from your httpd.conf or other configuration file for the given apache server:::

Could be you are starting way more spare servers than the server can handle for your load of simple web application. Passenger runs inside apache and forks from it.

Following this solution https://stackoverflow.com/a/47761138/7818637 I am designing forgot password flow APIs on rails where I am using devise_token_auth gem for authentication.

2. A GET call to verify the password reset token (clicked in email)

I am receiving the the following URL on my console containing redirect_url and reset_password_token:

When I call on this URL, I am receiving the following error: 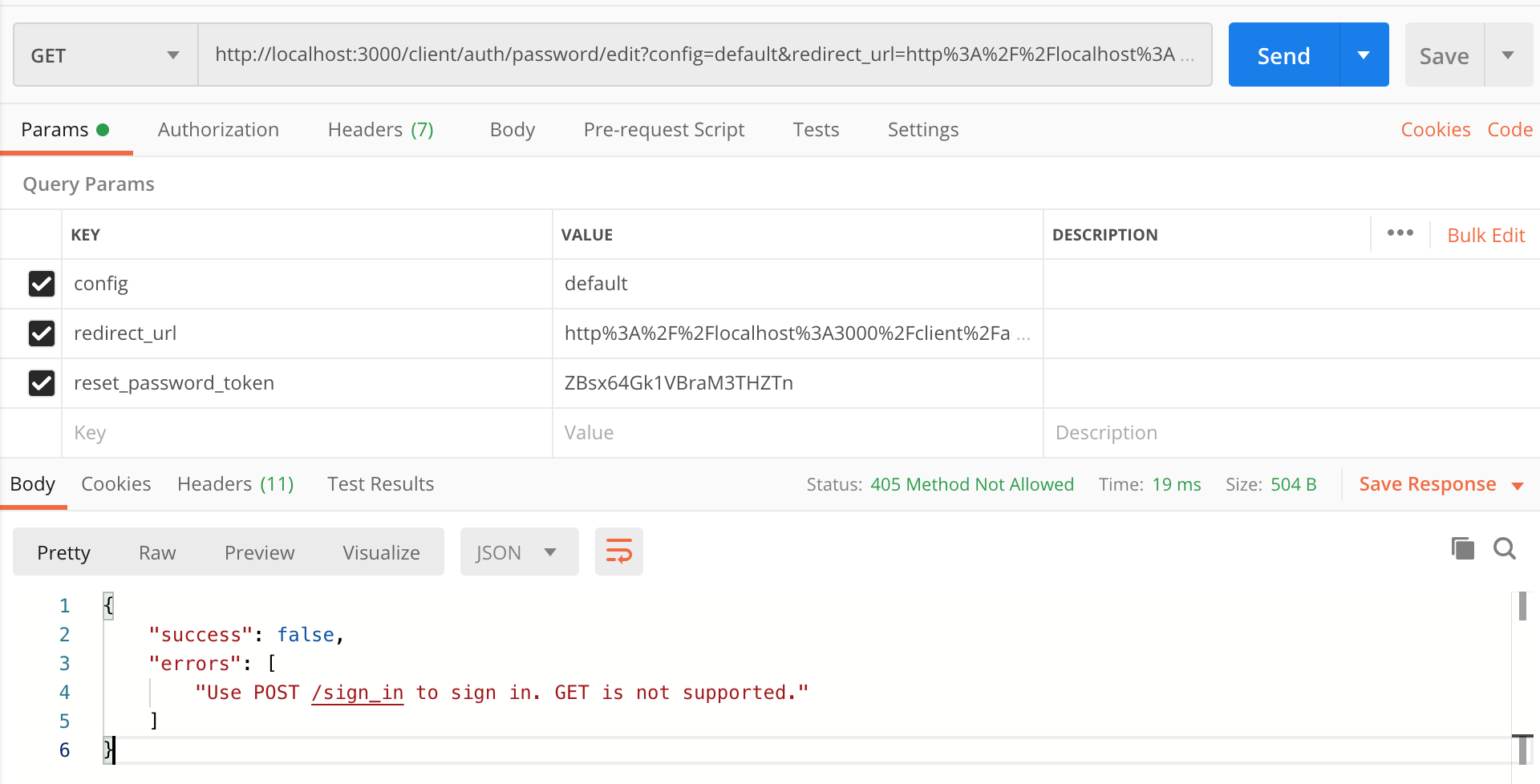 What I have already tried:

Following the issue here I have found that I am already using include DeviseTokenAuth::Concerns::SetUserByToken in my controller.

When the users clicks the url in your email you redirect them to /password/edit path. In this action you verify the user. If everything goes right the user will be redirected in redirect_url which is the sign_in path in your case.

You should change the redirect_url in your email and create an action and a view in which the user will be redirected. In this new view you will have the fields so the user can reset the password. Make sure that the new url will use ‘GET’. On form submission redirect user to sign_in path so he/she can log in with their new password.

I am working on a Rails application on Ubuntu 18.04.

I defined it this way in my Gemfile:

Everything was working fine until recently when I started encountering this error whenever I try to run bundle install:

Error: The wkhtmltopdfexecutable in thewkhtmltopdf-binary-edge gem is being loaded, but it’s also present in other gems (wkhtmltopdf-binary). If you meant to run the executable for another gem, make sure you use a project specific binstub (bundle binstub ). If you plan to use multiple conflicting executables, generate binstubs for them and disambiguate their names.

I have tried a couple of solutions, but none seems to work.

Here’s how I solved:

I simply had to remove the wkhtmltopdf-binary-edge gem and re-ordered the Gemfile this way:

I hope this helps

How can I remove Ruby on Rails and all associated gems?

I tried yum remove ruby but get this response:

If I write $rails -v, $ruby -v or $gem -v I still get their versions returned to me, which indicates that they’re installed.

This will display the RPMs that is currently installed that provides the ruby binary.

If so, then you will need to manually remove ruby libs and binaries from your system path.

You can locate binary by

Then you can proceed to remove it from your path.

Else search with find

then proceed to remove the directories from you server.

I guess below command would be useful for you to uninstall RVM packages. Please execute one by one.

then once successfully executed above commands then check whether ruby uninstalls or not like ruby -v, gem -v, rails -v or which ruby…

hope this will helpful for you!

removing ruby from the server i.e CentOs depends upon how you have installed it.
If it was install directly without rvm or rbenv then

if it is installed using rvm

I have following service file.

When I start the service as sudo systemctl start xxx_sidekiq.service I get following error

The reason for Permission denied is given as

How can I solve this problem.

I am trying to create a simple rails website that I can use to practice my mental math. The idea is that I create a random question using a randomly selected ruby question_creator function I defined. This function returns two numbers, along with their answer.

If a user types in an answer that is incorrect, I want to display a quick error message and display the same question again. While redisplaying the question I would like to keep track of the number of attempts required to find the correct answer, as well as the total time taken to do so.

Where I am stuck now is that I can not figure out how to maintain the randomly generated question, along with the number of try’s while reloading the simple_form_for after an incorrect input.

In order to do this I have created a model named Questions which holds the number of trys and time taken for each question. Ideally I would like to create an instance of this object whenever a question is answered correctly. The idea of having a single Question instance for every question answered is that I can then later use this to track my progression and improvements.

My Questions class method to generate random questions looks like this. I am not sure if this is even the correct place this method, so please feel free to feedback on this as well. My idea is that in the end I have several different questions e.g. add_two_numbers(), multiply_two_numbers(), subtract_three_numbers() etc… from which I can randomly pick one each time.

In order to pass the users answer, along with the actual answer answ to the create method I have added them as hidden fields in my simple_form_for.My Question/New page looks like this:

The create method in the questions controller:

Whenever I hit the point where question_params["answ"] == question_params["user_answ"], meaning that the user gave a wrong answer, I would like to increment the trys count by one and redirect him to the same question. As of right now, I can not get this to work however.

I have already build a quick prototype of this in python, if that is of any help: https://codeshare.io/arlrX7

I would be super glad I somebody could point me in the right direction, as I would really love to get this to work 🙂

There are many things wrong with this code, but let’s tackle the ones preventing you from making it work.

Having logic in your view is a bad idea, and it prevents you from reaching your goal, too. Define them inside new action in your controller.

So, add num1 and fiends as hidden fields in to your form, and assign those values inside the create action.

This way, when you render :new, you still have those @question and @num1 and whatever else you passed along

What it does is saving the question and then checking the answer. Instead, try:

This way you only save the question if the answer is correct, and then check if it was saved to determine what to do next.