I have a Kinect v2 and I am trying to connect it to my laptop using libfreenect2.

Here is what I have done so far :

Everything successfully installed and the build was successful too.

The output does not display any error but the Viewer windows stay black : 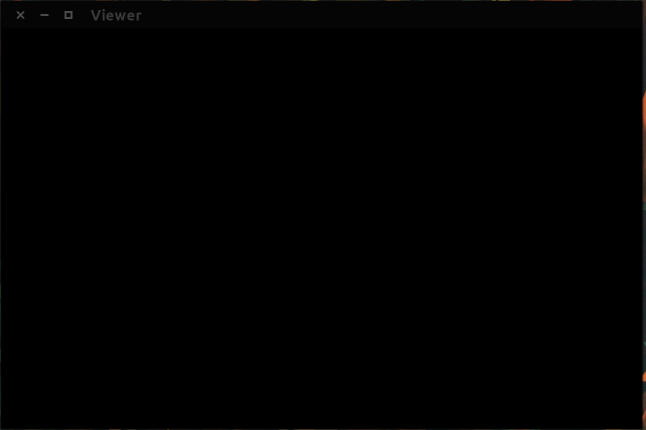 What am I missing here ?

It’s best to report this issue on GitHub where we can track your progress.

As you have installed OpenCL driver, you may also run ./Protonect cl.

Please follow up the issue on GitHub if you can.

My girlfriend just bought a Dell laptop with Ubuntu and updated to 18.04. But I saw that in Preferences > About shows the “graphics” as llvmpipe (LLVM 6.0, 256bits). “lspci -k” command shows that Nvidia MX150 is using “nouveau” driver and Intel UHD 620 “i915”. Ubuntu additional drivers shows that Nvidia-prime (opensource) is being used.

I uninstalled nouveau (it still was showing in the additional drivers but Nvidia-Prime disappeared, so I selected Nvidia 390 and when I reboot it was using Nvidia drivers and showing the correct card name (and the Nvidia driver in “lspci -k”, but when I select Intel in Nvidia-settings, after a long time and the app freezing, it tells me to reboot my computer and when I do it, changes back to llvmpipe and nouveau driver in lspci (I even uninstalled the f***ing driver).

The battery is dying with 2:30h (medium brightness and TLP configured) and it was supposed to last 4~5h, maybe it is related to screwed up drivers?
Thanks in advance, and sorry if I’m not being clear, English is not my native language

For me (only integrated graphics) helped setting i915.alpha_support=1. Try using instuction below:

P.S. My backgound with this problem:

Initially I had a blackscreen after splash, so I had to add nomodeset (afterwards replaced to i915.modeset=0). Doing this I could boot the desktop, but it was rendered by LLVMpipe (software rendering using CPU capabilities).

I’m new to Linux. I have been trying to install drivers for my XP Pen G640, because the tablet doesn’t work correctly with my current system (Ubuntu 16.04.05).

Now, they have provided a Beta version of their Linux driver that is said to be supported by Ubuntu (Heres the link). I have tried to install it using this method, but the terminal always returns with this,
Terminal Log

I have tried their instructions on how to install it from their site for Ubuntu 18.10 but that returns with “sudo: command not found”.

Now, I am really confused. How can I get the driver working?

This answer was originally posted by the author of this question, tasnim_tamim, as an edit to their question:

I FIXED THE ISSUE.

After 4 days of email exchange to the XP-Pen support team, I found out that it only support 64-bit PC’s. I on the another hand had 32-bit and as a result it gave out this error.

Issue was fixed by installing a 64 bit Linux Distribution. Used Ubuntu 16.04 x64 in this case and it worked flawlessly with no issues.

The Pen-Tablet Display works, but I need the driver that the pen fits with the screensize and Mouse.

Use the Terminal – /folder there the package is located

Now you get a window from the driver to set-up it.

But, there is a problem: I have to activate the driver always new

Adding this because driver support is under active development: I just bought an XP-Pen Artist Pro 15.6. Linux beta driver works for me on opensuse, better than advertised even: Supports everything but tilt sensitivity. In other words, the buttons and dial all work. However, in its present incarnation, it runs as a script that requires root: Just unzip in its permanent location (I used /opt), change into the subdirectory it creates and make Pentablet_Driver.sh executable, then link to the script from your autostart settings (or use crontab if you don’t want to be pestered for root password). Tip: If you use KDE, you can create a window rule to “skip taskbar”, so when you minimize it, the window disappears (but to get it back, use the Alt+Tab task switcher).

EDIT: Thanks to korvox and of course spbnick, there’s a digimend fork with full suport for the xp-pen artist pro 15.6! However, you have to use commandline (xsetwacom) instead of a gui to map the buttons. The setup is a bit tricky, but I wrote a step-by-step guide here: https://forums.opensuse.org/showthread.php/537880-XP-Pen-Drawing-Tablet?p=2918114#post2918114

Here’s a little write up on how to get the PenTablet program / driver from XP-Pen to work in linux as autostart without root privileges.
I tested this on Ubuntu 18.04 with XP-Pen G640 tablet.

Download the latest driver from XP-Pen’s website, and unpack it in a folder on your system. I used /usr/share/xp-pen

If you start Pentablet.sh as normal user it will complain, that it needs root access. But really all it needs is access to /dev/uinput and the usb tablet device.

So create a new group, for example tablet and add your current user to that group, replace <user_name> with your user name.

The first line will grant read and write access to the usb tablet device to group tablet. You may need to adjust idVendor and or idProduct if you are using a different tablet than me. Just plug you tablet into USB and look through the output of dmesg for example to find your id’s.
The second line will grant access to /dev/uinput

Now reload your udev rules with

By now you should be able to start the Pentablet.sh without sudo. You can now add it to the autostart by opening

Click add, give it a name like “XP Pentablet” and as command /usr/share/xp-pen/Pentablet_Driver.sh or where ever you unpacked the driver files.

Congratulations, you should be done! And despite this long explanation it’s actually pretty fast to achieve.

One side note: Your /dev/uinput file is now accessible by any process running as your user account. That could make it easy for keyloggers or other malicious software to steal your passwords or else. If you want to make this more secure, you can do the following:

Remove your user from the tablet group again (google if you don’t know how).
Add the following line to your /etc/sudoers:

This will allow your user to execute the following command without password, which executes the Pentablet.sh script with the group tablet:

Now you can put that exact command in gnome-session-properties and you are done again. This time with a more secure version!

I have installed Ubuntu on, but now I am trying to install NVIDIA CUDA Toolkit for the GPU. When I install it, it says that there is no driver found, so I have tried to install the driver, but I don’t know why after installation, the system not coming up. Maybe it is because of the wrong version of the driver.

When I tried to detect the driver version using sudo lshw -C display , it showed this information: 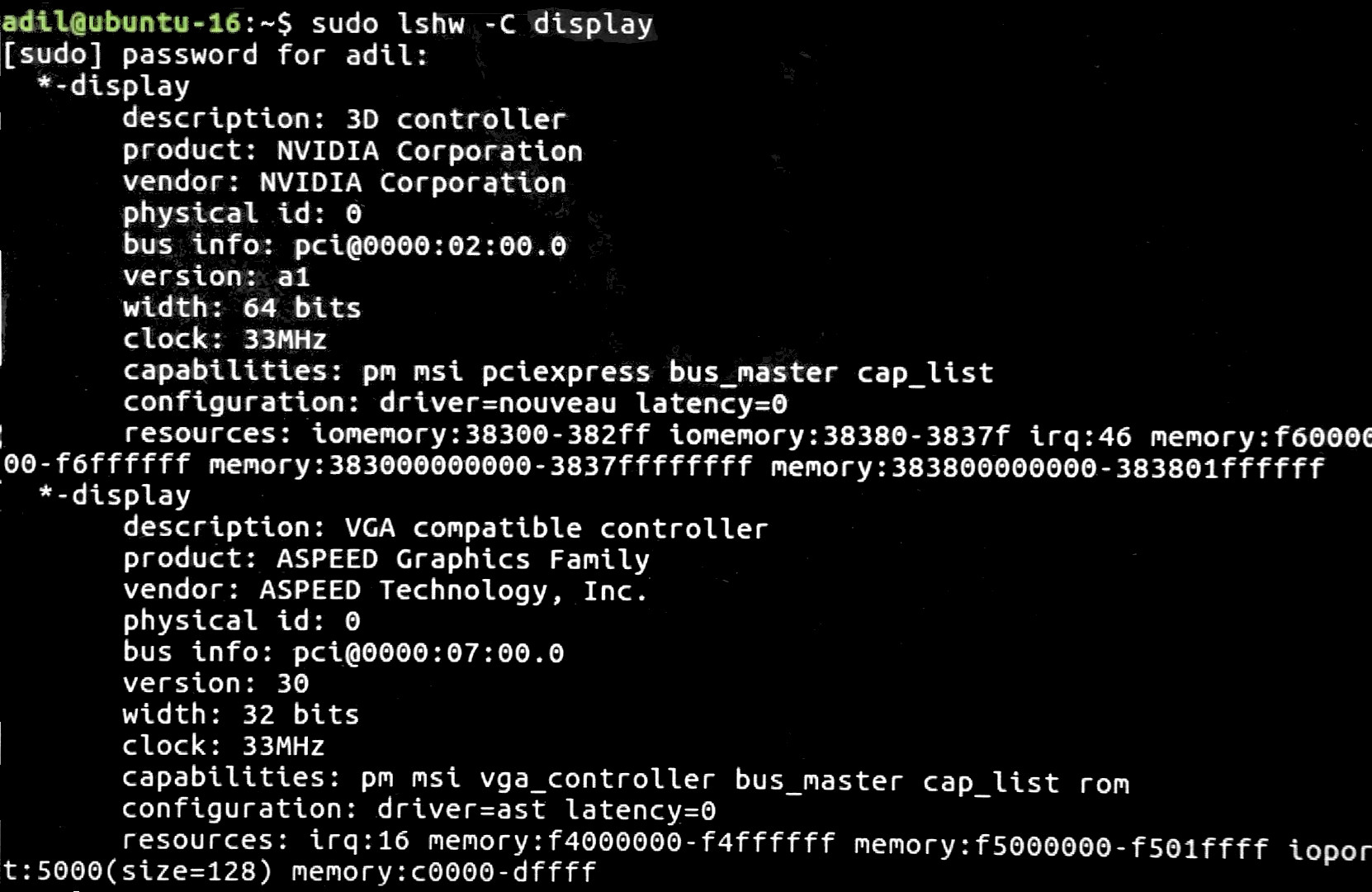 But here it doesn’t say that what is the product name of the driver, and also when I go Software & Updates -> Additional Drivers, then it says NVIDIA Corporation: Unknown.

What should I do?

Sorry about posting this as an answer, I’m not able to post a comment to ask you this. Can you show the output of sudo lspci | grep -i nvidia? That might show what GPU it is.

edit: I don’t think this is a duplicate. the output of lshw would typically have the name of the GPU, which you could use to install the right driver. Here’s what it would usually look like:

From the Software and Updater/Alternative Drivers tab:

Once the Nvidia drivers are installed and working, just install the cuda deb from the Intel site. Do check that your hardware is compatible with CUDA 9.1. You might need to use CUDA 8.0 which has lower requirements. Download the CUDA deb
Intel CUDA download page and the patches offered. Follow the instructions in step one, copied below:

The last step installs the cuda package(s) from the Ubuntu repositories.

updated to 20.04 now my printers don’t work I have a office jet 3830 and a
laser jet pro mfp m26nw I did the terminal install but it can not find 4 optional and 1 required setting

I have tried several attempts but without success. AMDGPU-PRO 17.40, 17.50, ROCm, Oibaf PPA, Kernel 4.16 and something more, but nothing makes OpenCL working with the AMD card and clinfo never gives right results.

Can I only wait the next AMDGPU-PRO driver compatible with Ubuntu 18.04 or could I do something different?

You can try to install their experimental driver from here:

Hope it works for you

I’m in the same boat – for completeness here is the thread I started.
@Mods, please consolidate if it makes sense to do so.

After the configuration of the mod_evasive. I found a log file there with the name of

After inspect the source files on https://github.com/jzdziarski/mod_evasive

returns the process ID (PID) of the calling process. (This is often
used by routines that generate unique temporary filenames.)

I did a dual-boot with Ubuntu 20.04 and since i did it, i can only have internet with Ethernet.

So I searched some issues on internet but nothing that I found worked.

I am unable to connect to any wireless network, so far I have tested 3 networks on both 5, and 2.4GHz bands. Every test I have noticed that the connection will stop during the authentication phase, as Ubuntu is able to find and search the networks no problem. Only when it comes to authentication, it has issues.

Some information about my device:

Some things I have tried:

In order to get the log directly from wpa_supplicant, I used the following script to attempt to authenticate to my wireless network (SSID and PASSWORD are replaced with the actual SSID and Password of the network).

From this, I get the following output:

Other devices are able to connect to said wireless networks perfectly fine. This is a clean install of Ubuntu with very little on it. Any help would be much appreciated!

Sometimes when plugging in my Wacom tablet, it works great. Other times, even though it is responsive, it is unusably buggy.

If I get the output (id’s may change)

then I know all is well. If instead I get

then I am in trouble. Unplugging the device and plugging it back in never seems to help go from bad to good, but does go the other way. Rebooting the system sometimes – but not always – solves the problem.

Are there two conflicting drivers between which the OS chooses? How can I force it to make the right choice?

To expand on your discovery and meuh’s comment above, the tablet has two VID:PIDs. One for Android Mode, one for regular Linux mode. It is not ideal, but in order to switch in to the correct mode you need to hold down the buttons on both ends for a few seconds. More info here: