Normally you use the non-removable Thunderbolt cable with the MagSafe connector to your computer. However, I think my cable is broken. The display flickered on once and then died a few moments later (have been able to repeat this once or twice) and want to rule out the cable the issue.

I.e Use a cable such as this one: 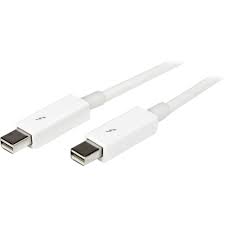 and the connect it to your computer and then plug into the display here:

Thunderbolt is supposed to be bidirectional so will this work?

If you’ve tried it please confirm.

Yes this will work fine.

I have two Thunderbolt displays attached to my iMac and one has a frayed cable like yours. I have it daisy-chained to my other display via a normal Thunderbolt cable between the two.

In fact, if you were to take the display apart, you would find that the built-in cable is actually just an ordinary cable plugged into a regular ol’ Thunderbolt port on the logic board. Nothing special about it other than it has the Magsafe power cord bound conveniently to it as well.

Thunderbolt uses a daisy-chain method for connecting devices, similar to how FireWire and SCSI were implemented in the past. This means you can link multiple Thunderbolt devices in a chain.

Not all Thunderbolt controllers are made equal. Their are different versions and implementations. However, There will be no harm in testing chaining two monitor together to see if it will work.

It can’t hurt to try.
You can’t fry the electronics, it just won’t work.
And a male-male TB cable (make sure you get one that handles Thunderbolt V2) is a lot cheaper than a new monitor.
And funny enough… Contrary to anything else Apple makes their official TB cables are actually quite cheap. (About $30-$40, depending on where you live.)